The Essential Guide to Sound Design in Filmmaking

From sound recording to the final sound mix: Learn what it takes to record, design, edit and mix sounds for moving images.

How to create stunning sound design for film and video

There are a few misunderstandings when it comes to what sound design for film is. First of all, it is not only about the arranged effects, loud guns, and clatters. Sound design is a long procedure of research to create an audio setting that supports the action and engages the spectators. The true sound designer is persistently listening, learning and experimenting.

Sound is typically distributed into three rudiments: the dialog, the music and the effects (here comes the gun shots and the car crashes). When you are recording dialog you must know that, by recording during shooting, it will need a fine tuning subsequently. So, you can say that almost all sounds and/or music will be added in post-production. 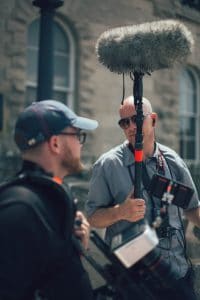 By being a recordist on set, you have to try to record all the dialog as cleanly and crisply as possible, with a tweak of background noise. As a boom operator, you should overhang the microphone above and in front of the person speaking and try to be as close as possible without being in the picture or letting its shadow enter the frame. That’s a really tough assignment and, in my opinion, higher and stronger individuals are the ones who are commonly required for this task because of the long time raising the boom and leaving it in the perfect position without moving yourself. 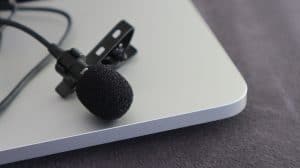 Of course, there are ways to capture sound without the boom: the secreted lavalier mic which is mostly placed on the actors or reporters chest (on the tie or the shirt, for example). The lavalier mic has no strings attached to it so that the person in frame can walk freely on set without being bothered and trailed by the boom and all its cables. The problem with the lavalier is that it is positioned underneath the actors‘ mouth, leaving an extra job for the sound designer, who has to match it to the sound quality of the boom later (and of course the post-producer who has to remove it from picture afterward). 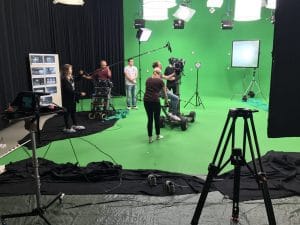 Room tone – The Sound that fills the Silence

One thing which is truly noteworthy about recording sound for great sound design for film is that, on set, the recordist will ask for some silence time, perhaps right after wrapping a scene. Particularly when you are shooting on an external scenario. That’s a simple but very important step since he is adding room tone to your film. By adding room tone, your film will sound very truthful to a real-life situation. Contemplate about where you are now. Are you sitting on your desk? Are you at home? Be silent for a couple of seconds and close your eyes. What are you hearing? Car noises? The air conditioner? The wind blowing outside? The birds and leaves on the trees? That’s your room tone and there’s absolutely no good film without it.

Shooting Silent – Not only second Choice

Going back to the dialog between the actors, there are a few things which I have to outline. Some of the conversations you hear in the movies are not recorded on location. That is called shooting silent, which is, to be frank, much easier than achieving perfect silence (only) on a busy set or when some specific director asks for it, depending on the complexity of the scene. Occasionally, the mic dialog can pick up some heavy noises like the sound of the actors clothing when he or she walks around the scenario.

Shooting silent can be a hard job to do. Why? Well, you have to record every single dialog on studio after shooting and then synchronize it to the actors moving mouth. Not only that but by recording the dialog on set you have the precise expression of the actor. So, for a more genuine and intense scene, directors often fancy production dialog, because it is too demanding to mimic the situation on the set and it is tough for the actors to equal the emotional level afterward. Moreover, it is an extra-job, meaning extra time, extra payment, extra studio rent.

By being straightforward, dialog editors are problem solvers rather than creative minds. Don’t worry though, there’s considerable room for artistry on the part of the sound effects. As for sound effects, they are usually made from scratch. We wouldn’t want to hear everything that really could be heard in a room. Our minds select the noises we want to hear and by adding every single room tone on your track, it wouldn’t sound, psychologically speaking, right. Sound is subjective and as a sound designer, you have to know how to distinguish what is essentially vital for the scene. You can say that the soundtrack of real life is too much for the movies. Our minds filter out certain noises. When you are, for example, really focused on your work, you don’t capture the birds outside or your colleagues walking around the room. So, on film, the sound designer and mixers are the ones who focus for us. Instead, it could lead to an untidy and almost exasperating outcome – we don’t want that. In an article by the NYT, the author outlines the difference between Sound Editing and Sound Mixing. 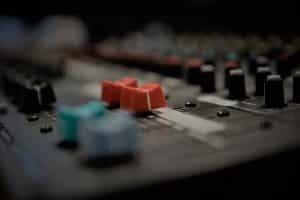 Most sound crews aren’t brought into the picture before the frame is perfectly locked. Meaning: the actors, scenario, lighting, and camera are ready to shoot. On some major production films, especially the sci-fi ones, directors hire a specific sound designer who crafts pre-defined effects which they are experts on. For example, ships flying around empty space, or weaponries and the lightsabers on fight scenes. Even though we all know that you can’t hear a thing on space, but ok – It generates authenticity to the whole image.

Now wrapping up, we still have the music that completes great sound design. It is perhaps the most cooperative component of filmmaking. It is normally, on a low budget, shaped by a lot of workforces and their assistants. But all in all, the younger generation of filmmakers are sharper on that matter because they took part in the music technology revolution. Which is: The digital production of music, the high aptitude of music production currently and the extent quantity of music made until today. We have so much reference that it nearly causes a slight disturbance when you are searching for flawless music or crafting the perfect tune for your film.

All in all, music can also impact and arouse our rudimentary sensations. Such as anxiety, pleasure and even hunger. It consequently induces, in a best-case scenario, each physiological outcome that follows that emotion. This could be racing heart, sweaty hands, etc. Especiall in the genre of horror and thriller, these effects are used extensively within sound design. A certain level of volume will make it unmanageable for the body and the conscious mind to disengage from these emotions. Shock effects as well as frightening buildups are very standard and work great. For ecample, a policeman sneaking in a shady cellar – approaching a corner – music gets louder and more distressing. But nonetheless, it swiftly can feel like a cheap trick when used too frequently.

So think about what your specific production needs in terms of sound design for film. Get people involved who know the job and who have a great expertise on the impact of sound design in film and video productions.

If you want great sound design for your commercial film production, such as Image Films, Explainer Videos or Product Films, just drop us a line and we’ll be happy to assist you.